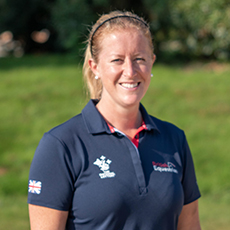 She qualified from Coventry University and initially worked in the NHS in Warwick, then Coventry UHCW, before moving into private practice. She now treats both routine and sports-related musculoskeletal patients for Halo Physiotherapy ​Clinic in Kenilworth. Lucy has worked closely with gymnastics, rugby, equestrian vaulting and the other equestrian disciplines. She also teaches APPI Pilates and is a member of ACPSM.

Lucy was physio for the equestrian team at the London, Rio and Tokyo Paralympic Games. Lucy also looks after the P3 Senior Eventing and Dressage Squads as well as the para team.

She has worked at various sports events outside of equestrian, including at the World Children's Games, School's Games and in the London Marathon finishing team. Lucy is a national equestrian classifier, an Invictus Games categoriser, an FEI Steward and an equestrian vaulting judge and coach. She enjoys dressage and eventing, having in the past completed Blenheim and Bramham, and now competes at lower levels for fun in her spare time.