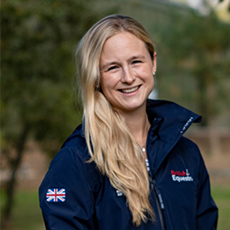 A vaulter since the age of seven, she started vaulting with the Warwick Vaulting Group, as a flyer. Competing at her first WEG in 2002 where she was the youngest member of the British team, she has represented Great Britain at 14 championships. Lucy is also the current British and English senior individual female champion.

She has a degree in sports and exercise sciences, and a Masters in strength and conditioning.