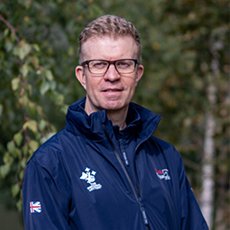 David joined the BEF in 2003 as a consultant for the podium potential Para-equestrian programme which he developed from its onset and managed up until June 2017. In 2009 he also took on the management of the Sport England funded talent pathways and developed a number of pathway initiatives including the BEF Excel Talent Programme, the BEF Young Professional Programme and the Youth Pathway Coaching Programme. He also instigated the BEF Para-entry programme and British Dressage Bronze level of Para-equestrian competition.

In 2017 David was appointed as Head of Performance Pathways, a role that sees him coordinate the implementation of the strategy and technical framework for Olympic and Paralympic athlete and coach development to ensure the supply and support needed for continued medal success at Senior Championship level.

He has a varied experience in the equestrian industry, as a dressage rider and trainer, lecturer in further and higher education, BHSI coach, MSc in Coaching Science as well as managing various equestrian businesses. He is also the author of two equestrian text books, a dressage judge and can sometimes be heard on TV as the commentator for Para-equestrian Championships.