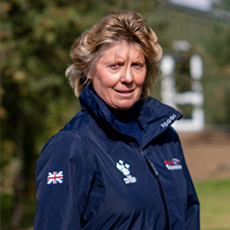 Di has responsibility for the structure, management and coaching provision of the GBR senior Jumping Team, she will lead a dedicated group of athletes, grooms and owners and work closely with World Class colleagues and British Showjumping, with the primary aim of delivering podium places at championship level. She also works closely with the Chef d’Equipes of the youth teams, keeping an eye on the young riders for the future.

Over the last 30 years she and her husband, Dietmar Ackermann, have developed their equestrian facility at Spring Farm into a centre of excellence for coaching and the development of young horses.  Di has worked with jumping’s youth teams since 1996 and was appointed British Showjumping Consultant Head of Training in 2002.

In 2015, Di oversaw Great Britain's qualification for the Olympic Games in Rio where Nick Skelton went on to win Individual Gold with Big Star.

She was awarded an MBE in June 2017 for her services to equestrian.