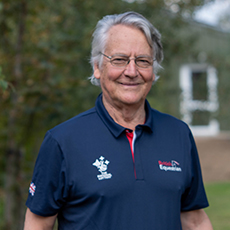 John has been in equine veterinary practice for over 40 years and has wide experience of the competition horse. He was the Team Vet to the British Showjumping team for 21 years from 1978, and to the British Dressage Team since 1983; London 2012 was his eighth Olympic Games.

John has been an FEI vet since the early 1980s and is currently Chairman of the FEI Veterinary Committee along with holding the position of 1st Vice President of the FEI from 2010 until 2014. He is a past Chairman of the International Treating Veterinarians Association, and was Information Officer and Treasurer of the British Equine Veterinary Association. He has several books published on veterinary issues of the horse.

As well as overseeing the Equine Sports Science and Medicine team, he is also the lead vet for the Podium Potential squad.