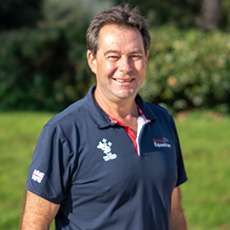 Mark left the King's Troop RHA as the Master Saddler in 2004 after 22 years service. In the army he competed in eventing, where he reached intermediate level, and in team chasing up to open level. Mark is a registered, qualified saddle fitter and regularly lectures and assesses for the Society of Master Saddlers (SMS).

Mark works in conjunction with the British Equestrian Federation on the World Class Programme, operating the Pliance saddle pressure system. He has also been employed as an overseas trainer for the World Horse Welfare, working with working horses in developing countries.

Mark was the official Master Saddler to the London 2012 Olympics and travelled with the Team GBR Paralympic team to Rio 2016.