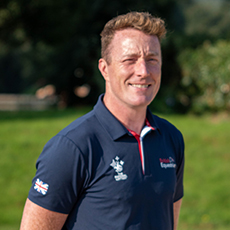 Robert is the team veterinarian for the Podium Potential eventing and para-dressage squads.  He has also worked as the team vet for the British Dressage Under 21 Teams since 2014, and was the Team Vet for the 2* European Eventing Championships in 2013 and 2015.

He graduated from vet school in Canada in 2002, going on to work in Kentucky (working with thoroughbred and competition horses including accompanying horses being transported internationally).  Also working in Canada, Robert moved and settled in the UK permanently in 2007.

Robert has a keen interest in management of competition horses.  Living in Thame on the Oxfordshire/Buckinghamshire border, he works in daily practice at Scott Dunn’s Equine Clinic