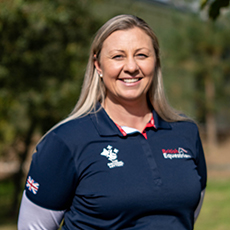 Sophie's responsibilities cover operations and logistics for the British team and World Class Programme activity.  She joined the Federation in 2001 having completed an equine degree, and as well as being involved in the World Class Programme, she has spent some time as the Federation’s Anti-Doping Programme Manager. Sophie has travelled with the British Equestrian Team as part of the “team behind the team” to three Olympic Games, one Paralympic Games and five World Equestrian Games.

Sophie learnt to ride as a young child on ponies bred by her parents and competed in various disciplines growing up.  Sophie’s other sporting love is tennis, which she plays competitively when time allows. She lives in Warwickshire with her husband and two young children.