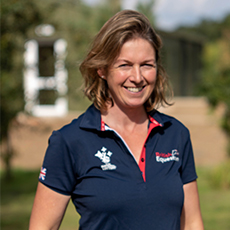 Liz Brown qualified at Cambridge University in 1995 and has subsequently worked in equine practice in Leicestershire and Sussex, before moving to Lambourn in 2002.  She is a partner in a specialist equine practice, focussing on performance horses in eventing, racing and dressage.  Liz was stable vet at Burghley Horse Trials for nine years and officiates at many BE events.  She is an FEI vet for Eventing.

Liz was the Assistant Vet to the British Eventing team from 2005 to 2008 and attended the 2005 European Championships, 2006 World Equestrian Games and 2008 Olympics. She has traveled extensively with British competitors and was appointed as British Eventing Team Vet in 2009.

Further to this, Liz led the veterinarian team at the London Olympics in 2012 as well as in Rio in 2016.